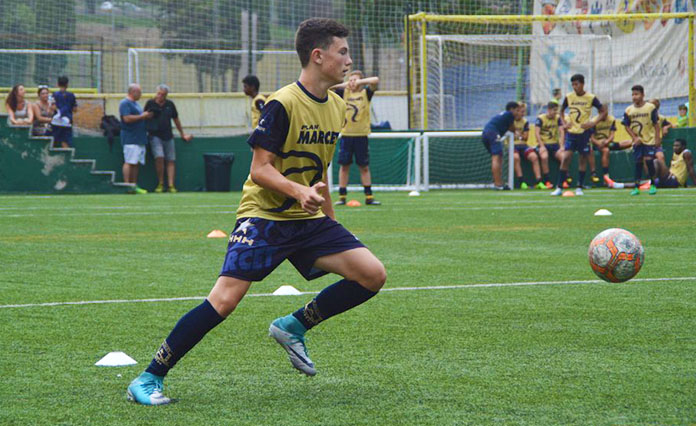 David González signs for Real Madrid’s U18 after two seasons with Numancia.

“I usually play in attacking midfield, but on occasions I drop back to midfield or even play as a winger. I consider myself a player with a lot of reach into the area and capable of scoring goals, but I can also make the last pass and create plays”. This is how David González Ballesteros defines himself. He is the brand new signing of Real Madrid’s U18 side for the 2019-20 season.

Question.- Who gave you the news? How did you react?

Answer.- My parents told me. It was a normal day, I’d just woken up from a nap. I was amazed because I wasn’t expecting it at all. I didn’t even know they had their eye on me, everything was a surprise. At first I couldn’t believe it, but little by little the realization began to sink in.

Q.- When did you fall in love with this sport?

A.- The passion comes from my family. My Dad has played football his whole life and ever since I was three years old I have gone to watch him play. Whenever I could I’ve always played and in the end, after so much enjoyment from playing, I finally fell in love with the sport. When I was six, I signed up for the municipal school in my city. Two seasons later I started playing for the Burgos CF’s U10 side and was here for about seven years. In the 2017-18 season I signed for Numancia, where I spent two years. And now, thanks to all this, I was able to sign for Real Madrid.

Q.- You came to Marcet just before starting your first season with Numancia…

A.- Yes, I took part in an intensive course that lasted 15 days in August 2017. I had heard of Marcet and so decided to try it out. What I liked most was the working dynamic. I recall that they push you hard during the summer courses, but always in an ordered and well-planned out way.

Q.- What did this experience give you?

A.- It made me improve. I helped me see many aspects of football in a different way. For example, I learned how to make the most of open spaces without always having to get close to the ball.

Q.- How will you face this coming period at Real Madrid?

A.- I want to continue how I’ve been doing up until now because it seems to be paying off. At Madrid the modus operandi will be different and I know that in the beginning I will have to push and sacrifice myself harder. But in the end, the aim of all kids like me is the same: advance little by little in order to become professional and reach as far as you can.