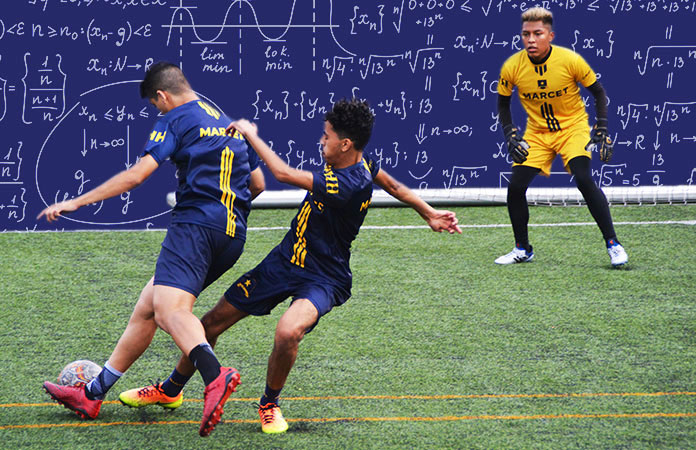 Statistics are becoming a more prominent tool for experts. Both concerning signings of top players and evaluating humbler, aspiring prospects.

When Esteban Cambiasso left Leicester at the end of the 2014-15 season, the Foxes were forced to sign a midfielder to replace him. The managers of the team then decided to rely on stats. The numbers spoke clearly: in the ranking of the biggest European leagues, N’Golo Kanté was among the best players in terms of successful tackles and recovered balls. Steve Walsh, head of the scouting team at Leicester, then travelled to France to take a look at the French athlete. The English club signed him and ended up winning the Premier League 2015-16 to everyone’s surprise.

What no longer surprises anyone is the growing use of statistical data in football. The sport has moved more slowly relative to other sports like baseball or basketball, but the stats craze has come knocking. “Until the end of the 1990s, statistics were a totally foreign concept to the world of football,” recalls Chechu Fernández, head of the Spanish subsidiary of Opta, one of the largest companies dedicated to developing and analyzing sports data. “There used to be talk about the number of goals, the cards and little else, but things have changed and today the press relies on numbers now more than ever. I’ll say that there isn’t one coach who doesn’t look at a game’s statistics once it’s over.”

Possession percentage, passes made, dribbling, shots on goal, chances had… In a 90 minute game, you can read up to 3,000 different actions. Opta, which controls 80% of the Spanish market concerning sports statistics, employs three experts to analyze each game. “We count every action concerning the ball, we want to know who hs it, how they do it and where they’re going with it,” explains Fernández, whose company provides data to institutions such as LaLiga, clubs such as Barça and media bodies such as ‘Marca’ and ‘As’.

Today you would have a hard time finding a football club without a data analyst on their team, and this isn’t something exclusive to top-tier championships. Statistics are used regularly to prevent injuries, prepare matches and sign players. Football has proven itself somewhat resistant to innovations, which traditionally take years to apply despite being technologically available (automatic goal detection, VAR …). This could be attributed to the fact that football doesn’t lend itself as well to statistical analysis as other sports do. Football is not linear like baseball. A game won’t accumulate as many points as it would in, say, basketball. Chance plays a fundamental role, while player movement without the ball is as or more important, even, than movement with the ball, complicating things for mathematicians.

“there’s already a lot of data avalaible. now it’s all about training analysts who can interpret it being able to see beyond the figures themselves”

Statistics are to be taken with a pinch of salt because they can be deceptive. Having more data doesn’t necessarily come with more success. “You have to know how to use it, collect it well, interpret it, contextualize it… The combination of which makes for a successful scout,” says Alberto Martín Barrero, former coach Marcet, currently responsible for Betis‘ methodology development. “When it comes to signing, especially concerning grassroots football, extra-sports information is also very important. It will say a lot about how a player thinks, attitude, the people most likely to make up their social circle…”

All this simply cannot be reduced to numbers but has to be calculated one way or another. And that’s what stats companies pride themselves on knowing. “The human element to analysis is still fundamental,” says Fernandez. “Nowadays, there’s already a lot of data, now it’s all about training people who can interpret it, analysts need to use numbers, being able to see beyond the figures themselves. physicists or nutritionists are no exception… But now, football has evolved over time, and will also have to modernize in terms of its statistical analysis.”

Change is here and there is no turning back. Many clubs have been making marketing decisions for years based on statistical calculation, increasingly applying it to the playing field. Objective assessment will mark the future of football. Not only on big league pitches but also at practice. This is demonstrated by the Matrix system, focused on being aware of and monitoring the strengths and weaknesses of a player through the use of over 140 different parameters. “For example, if we talk about the shot, we aren’t just analyzing the shot itself, but differentiating the inside, instep, forefoot or volley shot,” explains Jordi Aumatell, head of Marcet’s Evaluation Department: “The goal is to design an hour of clearly oriented progress so that our students fulfil their objectives and move forward in what is most needed to them individually.”

Objectivity is the key. Both when signing for the Champions League and at the time of evaluating a player in their training. And the same happens in physical preparation. The professionals of the sector work with more and more numbers, for example through GPS sensors, capable of collecting objective data such as the kilometers traveled, the maximum speed reached, the number of sprints made, the distance between one player and another, the zones of the field trodden more often… With this technology you can compare the performance of the same player over the weeks or of several players during a match or a training. Thus, the interpretation of these data allows to manage in a more objective way the distribution of physical loads during the season.

“The data is simply there to help,” says Fernández. “The numbers aren’t the most important thing, they won’t explain football in its entirety, but they’ll point us in the right direction.” A future awaits us in which both the statistics and their application will be increasingly immediate. Tomorrow players will no longer be signed for their “good game-vision” or “perfect long-distance shot”. They’ll be hired based on the percentage of passes between lines made or average shots scored in a match. Neither will a coach evaluate an aspiring, young player based exclusively on his or her subjective perception. The numbers will guarantee the effectiveness of every technical decision. They will make personal, intuitive, gut instinct have less and less weight in the magic and emotional realm of football.

For competitive sports preparation based on scientific evidence