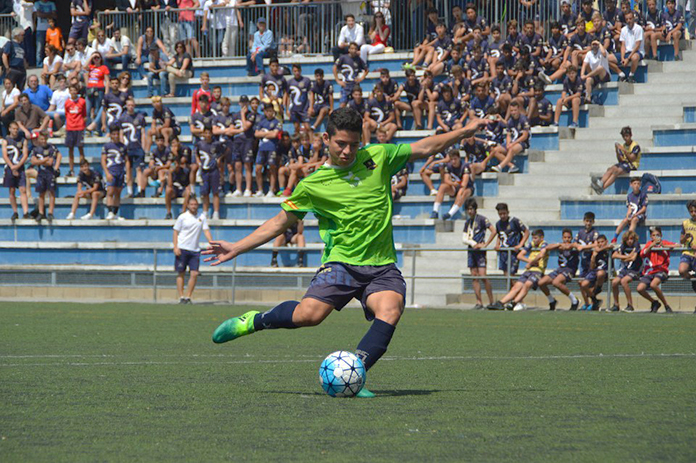 The talent and dedication of Gustavo Zelaya earned him a place with Extremadura.

He returned home at Christmas to be with his family, spend time with friends and take a well-deserved rest — but Santa Claus left him something very different under the tree: the call to play for the U-17 Honduran National Team. More training sessions and more work. Although, of course, it was the best present imaginable for someone who has spent their whole life preparing to be a professional footballer.

At that point, Gustavo Zelaya had been at the Marcet High Performance Academy for a year and a half. He moved to Barcelona in June 2015 to advance his footballing career. Not an easy decision for a 14 year old boy. Football required him to leave his homeland and in return only promised him tough training in a distant country.

Time has demonstrated that Gustavo chose the right path. What seemed to be difficult conditions for a young football player in the short term, eventually became the beginning of a personal success story. Not only because of his premiere with the National Team in 2017, but also because his brilliant career led him to Extremadura two years later, after four seasons honing his talent in Barcelona.

“I practically lived at Marcet for most of my teenage years,” remembers Gustavo. “I tried to make the most of every training session, every match… The most important moments were when we played against the lower teams from sides like Barça, Atlético de Madrid, Valencia, Athletic Bilbao, Villarreal, Osasuna, Espanyol, Girona… There I had to put into practice everything I was learning. Whenever I made a mistake, I would try to remember it so I could work on my weaknesses and turn them into strong points. This is how I continued to improve”.

Gustavo’s ambition, technical bases and commitment were met in Barcelona by a methodology that was able to bring out his talent. “From the start he showed quality with the ball at his feet and stood out because of his strength,” comments Alberto Martín, one of the Honduran’s coaches. He’s always maintained a good working standard thanks to one of his best characteristics: his consistency. This enables him to have stable values which are very similar to what is expected in professional football.”

““I would like my life to serve as an example for children, so that they understand the value of effort”

Everyone coincides in remarking on Gustavo’s exemplary behavior. Not only the technicians, who highlight his “positive attitude” and “good predisposition to continue improving”, but also his teammates, who describe him as a “great friend” and a “kind, educated and reserved” person. A few characteristics that Gustavo is already providing for Extremadura.

“The club was looking for a right back and went straight to Marcet,” explains the defender. “From the Academy they sent me to Almendralejo to be able to join the preseason. I knew it was a great opportunity and that I had to make the most of it by putting into practice all the values ​​learned in Barcelona. The sensations are very positive. I am optimistic and I hope to have a great season with the club. I want to work and keep improving.”

From his time at Marcet, Gustavo highlights trips to play matches and tournaments in Spain, France or Belgium… And the different cultures he came to know thanks to colleagues and “great friends” from around the world. “But above all I learned to give football a meaning. I began to see this sport from the perspective of a technical director because I began to understand the importance of helping my teammates on the pitch, giving good pass lines and transmitting the coach’s ideas. I also tried to be a leader off the field, in the residence, on a daily basis, encouraging my colleagues to improve. Therefore, I feel that Marcet is the best thing that has happened to me.”

Not surprisingly, Gustavo wants to achieve excellence not only in football, but also personally. “I would like my life to serve as an example for many children, so that they understand the value of effort and sacrifice. Let them know that the reward will come sooner or later, that it is important that they believe in the process, in what they do, in their evolution, in which they can improve every day. And never forget to have a good time.”