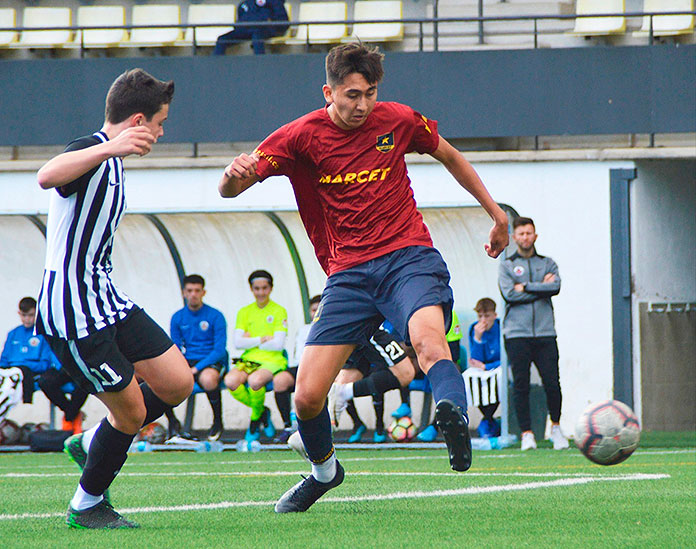 Since he started playing soccer, José Jiménez Pinzón had a clear objective in mind: to obtain a scholarship to study in the US and thus be able to combine sports training and academic studies. His dream came true in the 2020-21 season, when the Colombian midfielder began his career at Molloy College in Rockville Center, New York.

“Marcet gave me the push I needed to make that leap,” explains José, who arrived in Barcelona in 2017. “I was 13 years old and I was looking for a summer course to be able to progress, since in that season I never trained. I liked that soccer camp. It was top level. After those two weeks I knew I needed more from Marcet if I wanted to become a footballer “.

“In Barcelona I learned intensity, and perseverance… I understood what a PLAYER needs to perform in a team”

Thus, the following year, José enrolled in the Easter intensive football course. “During that camp I had the opportunity to participate in the Oviedo Cup. I really liked the experience and so I signed up for the Professional Program. I was in Barcelona for two and a half years, which allowed me to train both in sports and academics. If it weren’t for Marcet I don’t think I would be at Molloy College now. ”

To say that this Colombian midfielder has seen the world is an understatement. José has lived in countries as different as England, the United Arab Emirates, Angola, Indonesia or Egypt. “But in none of them did I find anything that resembles Marcet. This academy is a unique place in the way of preparing its players. In Barcelona I learned intensity, rhythm, perseverance … And I managed to be a consistent player. I understood what a footballer needs to perform in a team”.

During his time in Spain, José was able to face teams such as Atlético Madrid and Sevilla, as well as many other teams from the Division of Honor. “My best memories come from the trips we made to different parts of Spain. I got to know the culture of this country and face the best teams from each region I visited. That made me feel like a professional player.”

“The US system is very similar to Marcet’s, because both value sport and studies equally”

“Marcet taught me how to be a student on and off the field. He taught me to put into practice everything I learned, to use all the resources that this academy put at my disposal,” explains the South American player, who thanks to his advances was able to win the scholarship he wanted so much. “My idea had always been to play in Division 3 in the US, but Marcet made me reach Division 2, which only 6% of players access.”

After all, the reality that José has found in New York is not very different from what he found in Barcelona. “The US system is very similar to Marcet’s, because they both value sport and studies equally. At Molloy College I can study without neglecting football. In my last two years of university I will also have the option to play in Division 1. It is a dream come true. ”