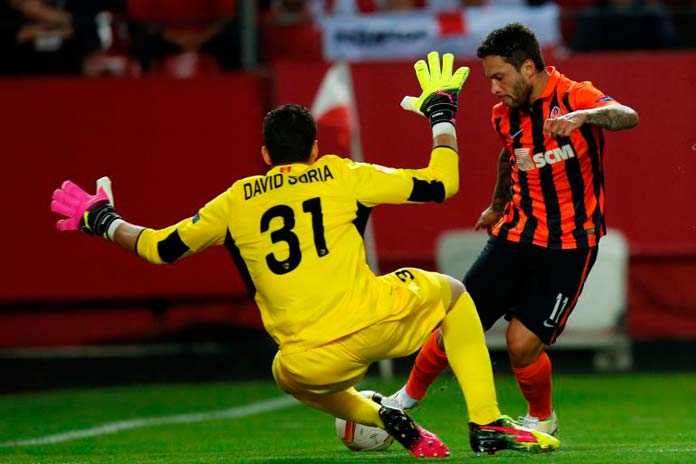 After coming close to an early retirement, David Soria makes a place for himself in Seville’s starting eleven and won an Europa League.

David Soria’s sporting career is reminiscent of a film. The ending is a happy one, but the path leading up to the positive payoff is plagued with testing and difficult moments, bringing Getafe’s goalkeeper close to an early retirement. In the midst of all this, he tried to relaunch his career at Marcet at it’s most challenging and crucial point in time.

“I was in my second year in under-14s and I decided to sign up, wanting to be at my best for the coming season”, explains David on a phone call from Seville: “I’d heard good things about Marcet from Óliver Torres and some of my teammates. Despite my age, it was without doubt a professional campus experience”.

At that time, David was at Real Madrid CF. He had been there for a total of nine years but his career never seemed to take off. “We decided on Marcet and the truth is we have fond memories of the place”, says Rafael, David’s father. “He got to train with Tommy N’Kono and the final report we received assured that David had the skill set to make it to professional football. They had high hopes for the boy and apparently rightly so”.

However, the road to success wasn’t an easy one. Seen as he hadn’t settled in Madrid, David tried his luck in England, where he tried out for the likes of Birmingham CFC, Stoke City FC and Leicester CFC. “All the same, I ran into an injury and that definitely cost me” explains the goalkeeper, who had no choice but to make his way back to Spain, with his head down and his tail between his legs.

David looks back on that moment as the “lowest point” of his career as an athlete: “It was tough, not belonging to a team. At that point, I was thrown as to where I’d end up but I was sure I deserved more than what fate had lined up for me so far”. Without a contract and close to putting his boots away for good, David, humbled, felt his place in the footballing world fade until he received two game-changing calls the very same day. Sevilla in one hand, Real Sporting de Gijón in the other. From empty hands to the luxury of choice, the nightmare had turned into a dream.

Having family in Andalusia, David’s mind was made, he’d make his way to the district of Nervión and call Seville home. It might have been an injury that halted his game in England, but it was the injury of another goalkeeper that would make way for his place at the club he’d eventually make the starting eleven for today.

With Sevilla, David has come to where he is today, ’til now the highest point of his sporting career. In the 2015-’16 season, David saw his team through to the UEFA Europa League as one of the key components to said accomplishment. “My relationship with the team started that year in third division and ended with us lifting the cup after beating Liverpool at the final in Basel. It was a huge step forward and all thanks to Unai Emery, who gave it his all and put me in front of the goal despite also having Sergio [Rico] and Beto”.

That year, David stood in the way of Sevilla’s opposing strikers in both the Europa League and La Copa del Rey, where they also reached the final, confronted by FC Barcelona. “Right at the beginning of the season, Emery didn’t even play him for friendlies,” his father recalls: “But David earned his place by way of training no-end.”

Rafael Soria assures he had never imagined his son would eventually become the professional football player he is today. “The first time I saw him train, I couldn’t believe my eyes. Having said that, getting to where we are hasn’t come without suffering. we’ve been through some hard times”, says the keeper’s father, paraphrasing the latin saying Per aspera ad astra (through hardships to the stars). “My father was the only person to truly believe in me. Not once did he stop fighting for my place in a team” says David.

After finishing a successful experience with Sevilla, the goalkeeper from Madrid began a new adventure in the ranks of Getafe. The club ‘azulón’, or blue club, finished the 2018-19 season just two points from securing a place in the Champions League and David’s market value rose to 15 million euros. Sevilla wanted to sign him again for the 2019-20 season, but Getafe broke the rebuy option for the Andalusian club by paying 1.5 million euros. At 26, David Soria certainly shows no lack of suitors.